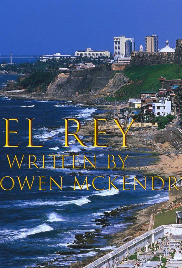 A family, along with their son’s best friend, move from Florida to Puerto Rico, and have to adjust to their new lives. Along the way, they make friends, as well as enemies, form relationships, and learn the secret about why their father moved them to the island.

We start in Cocoa Beach, in the summer of 2021, with our two main characters, Logan Wilson, and Ollie King as they navigate their way through the summer before their junior year in high school. Ollie’s dad has recently gone missing, and he is living with Logan, along with his parents, James and Tiff, and older sister, A.J. Ollie is not very optimistic about the disappearance, and believes his dad is most likely dead. He is not on the best grounds with his mother, Steph, as Ollie believes she is losing her mind. In the first act, we are shown the building blocks of Ollie and A.J’s romantic relationship, as they consistently flirt, and it is hinted at multiple times that Ollie has some sort of feelings for A.J. James and Tiff inform their children that they need to move to Puerto Rico for James’ business endeavors. Logan tells Ollie the news, and they agree that things would be better for both of them if Ollie came with them. Ollie says goodbye to his tearful mother, and then they head to the airport to take off for San Juan to end the first act.


They arrive in Puerto Rico and drive to their new house, which is incredible. While the kids and Tiff all go straight to the house, James goes to check out his factory, which is one of the first things that the audience sees from James that raises their suspicion. We are taken through Ollie and Logan’s first day at St. Anthony’s school in Puerto Rico, where we see both of their intelligence levels, and meet two other characters that are prominent in the story, Angel and Derek, players on the basketball team at the school, as they try to convince Logan and Ollie to join the team. A.J convinces Ollie to try out in the end with some flirtatious persuasion, and he and Logan both make the team, and are named starters. The night that the boys make the team, we follow James back out to his factory, as he talks to a man, whose face we cannot see, about the company’s production.


The team plays their first game against the previous year’s league champions, Abbott Academy. Their top player, Luis Vasquez had committed to Florida to play basketball the year prior. The night before the game, Ollie goes to get a drink of water late at night, and hears James arguing loudly on the phone, and for the first time, Ollie is now suspicious of him along with the audience. A.J and Ollie continue to generate more chemistry, as you would assume living in the same house would do.


The game against Abbott does not start off great for St. Anthony’s, but after a little extra motivation, the game becomes back and forth, and unexpectedly exciting. At halftime, Anthony’s is only down by four. Head coach Rivera tells the team to keep feeding Ollie the rock. Ollie goes on a run in the second half, and puts the team up by five with a couple minutes left. Abbott comes back to tie it up with mere seconds to go. Ollie carries the ball down the court, steps back, and nails a buzzer beater, game winning three pointer in Luis Vasquez’ face. In the celebration, A.J and Ollie come dangerously close to kissing, before Ollie is pulled away by his teammates. After this, Ollie sees James walk out of the gym with a younger looking Puerto Rican man, and his suspicion grows as he follows them outside and overhears their conversation. Ollie tells Logan about the encounter, but Logan brushes it off as nothing important.


The next day at school, they find out that the man that was talking to James, was Angel Ruiz’ brother, J.P, who works for James’ company. After practice that night, the players on St. Anthony’s go out to do a little “team-bonding”. They go to a bar, and later on in the night, end up buying supplies to egg Luis’ house. While they are doing so, Luis’ dad comes out with a pistol, threatens them, and shoots his gun in the air. The next day, the guys on the team hang out at Logan and Ollie’s house, and plan to go to a big party that the cheerleaders are throwing at one of their houses. Logan is completely willing to go, showing how he has developed into a more outgoing person in San Juan. At the party, Ollie takes a tour of the cheerleader, Emma’s, house. A.J sees Ollie go into Emma’s room, and gets upset, and we can tell that she actually has feelings for Ollie as well. Luis crashes the party, and throws a shot at James, as he suggests that there is another reason that the Wilsons are in Puerto Rico. This builds the suspicion in both Ollie and the audience of James and his business dealings.


Ollie tosses and turns in bed, trying to put his suspicions of James aside. He ends up breaking, and going out of his room to check out James’ office. His suspicion peaks, and he almost gets caught by James coming to take something. A.J catches him though, and Ollie explains what he was doing, and also explains the misunderstanding at Emma’s house. They end up talking it out, and then kissing each other. Ollie is the happiest that he will be for the rest of the movie.


The next day, A.J drives Ollie to her dad’s factory, and Angel invites Logan to come over to talk. They both figure out at the same time that James is actually involved in an incredibly dangerous drug empire, in which they manufacture cocaine. Then Ollie figures out the big twist, as his father is business partners with James, and he is known as the kingpin by the dealers. They call him El Rey, the king in spanish, hence the title. The kids decide to call the cops on James, and Tiff finds out, and informs him, which suggests that she has known about the truth behind the business the whole time. James and his army of goons prepare for a shootout with the cops.


Ollie, Logan, and A.J drive back out to the factory behind a long line of police vehicles, and pull up to see that they have barricaded sections of the factory, and have armed men around the perimeter. The shootout commences, and continues until Scott sees his son, and flashes back to the times before all of this, when Ollie was probably around ten years old. He realizes that now would be the time to do the right thing, and everything seems as though it may be ok, as the shooting stops, and Scott walks to the cops’ side of the shootout to be cuffed, and almost hugs Ollie, who has come forward to see his dad. Before that could happen though, James takes Ollie and points a gun to his head. At this point we realize how power hungry a person can truly be, as a person that James once loved, is being threatened because he doesn’t want to have to give up his money and power. Scott tries to pull his gun on James, but he isn’t fast enough, and James shoots him in the chest, before Ollie punches him in the face, knocking him out, as the cops go over to arrest all of the men. Ollie had just regained his hope, before having it all crushed again. As James is dying, he says one last goodbye to his son, along with A.J and Logan.


There is a funeral for Scott, and then Steph and Tiff decide that they could co-parent their children together in Puerto Rico if that’s what they wanted to do. They decide to stay, and try to help St. Anthony’s win a championship.


The last scene of the script, is the previously referenced rematch between St. Anthony’s versus Abbott Academy three months later. We pick up with 31 seconds left, as Ollie makes a three pointer, and then Abbott comes down and answers with one of their own. Coach Rivera calls a timeout, and draws up a play. They try to execute the play, but Logan almost turns the ball over. Ollie regains possession, and throws a lob up to Derek Torres the captain of the team, for the game winning alley-oop as time runs out. Ollie wins the championship game MVP trophy, and while the rest of the team is celebrating in the locker room, he sits at half court, alone with his trophy and his thoughts. Logan and A.J come to sit on either side of him to support him. When asked what comes next, Ollie suggests baseball season, implying there could be an add on to the script. When Tiff comes back into the gym with Mr. Vasquez, Ollie’s suspicions rise again, but he subsides them as the script ends with a kiss between Ollie and A.J, and one last line from Logan “ew.”

Transformers: The Hunt for Starscream
feature
By Emily (E.M.P.) Phillips
After the end of the intergalactic war between the valiant Autobots and vicious Decepticons, Megatron's hired torturers, the Decepticon Justice Division, set out to kill the greatest traitor known to Decepticons: Starscream.

Mausoleum
feature
By Brefni O'Rourke
In a plague-ravaged future, scrappy grave diggers battle elite tomb raiders for entrance into a fortified crypt, but once trapped inside, they must face off against a sinister threat from beyond.