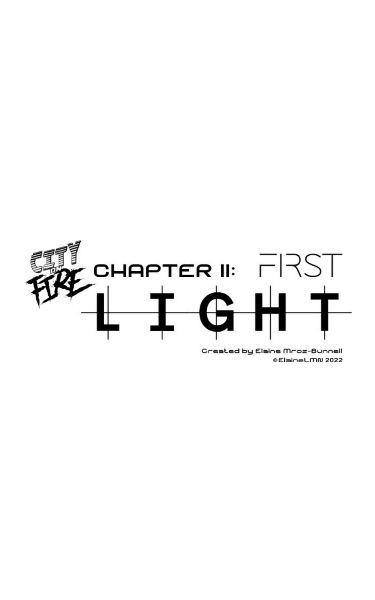 In a city on the edge of oppression, a lone rider tries to escape, and encounters a ghost from long since past.

Pondering how the world go to this point, Ryder (Age 26) makes the hard choice to leave her quiet but underclass life in the slums of a futuristic city of false promises. However, leaving the walls has long since been outlawed and she is trailed and caught by an elite policing Android called the Darkrunner. Man and machine clash, and Ryder is almost taken out, but is saved by the entrance of Simon Cain (Age 56), who had been tracking the Darkrunner's radio signal. After Cain hastily patches Ryder's wounds, the two concoct a plan to take down the proto-fascist government that has been left unchecked for two long, one Cain seemingly had a regrettable part in helping to rise. Cain fashions an explosive out of Ryder's motorbike, who sneaks into the central tower of the city in disguise as the Darkrunner, with Cain running recon and support from his lab. Things take a turn, however, when the man at the top, Micheal Wolfe (early 50s) finds out what's going on. He traps Ryder in his office, and the two discuss why Wolfe does what he does. Both Ryder and Wolfe almost seem to be pulling each other to their side, until Wolfe finally snaps, pushing Ryder out of the window. Knowing it's too late for her, she throws the explosive as she falls, heavily damaging the tower and injuring Wolfe, but ultimately unable to kill him. Cain rushes to her body, and a crowd gathers in amazement that Wolfe is still just a man. A man who can be hurt, taken down. There is hope in the air, and Cain vows Ryder's death will not be in vain, fading into the gathering of people.

Rapture of Elle Divine - Time to Pray E$
television
By Reid Barwick
Archangels intercede to save Treasury Agent Casey’s life as the Black Angel Syndicate are on the Agent’s and Ghost Writer’s inquiry into the financial holdings. Elle Divine and the disciples leverage net apps to proselytize their arrival through music and a resurrection.

Victims
television
By Travis Steele
When what could be true, is true, one couple will fight to gather the victims that will reshape the world.

Hammer Hero
television
By Jonathan Barbour
When the chosen champion of humanity mouths off to the Goddess, he's replaced by his unqualified and underprepared step-brother.