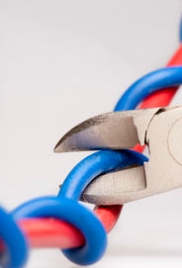 The world of Bomb squad guru and tokemaster Chase Malachi has always been a bit surreal. but nothing can prepare him for the outlandish journey that begins with a phone call while he's at work detonating his latest experimental IED (and of course getting stoned) It's his partner DEVON, with word of a mysterious device on a running timer found in an office building.
He gets there to find a massive conglomerations of circuitry harvested from the electronic devices in the building, Everything about it defies logic and understanding. Nothing Chase tries stops the timer, yet there are no explosives present, and none can be found in the building
When the "bomb" goes off it's not with explosive force, but with a decaying and disintegrating of the entire world, indeed the universe, Chase and Devon included.

then the story appears to reboot, in what turns out to be a slightly different parallel reality, as Chase again encounters the device, this time with a growing sense of deja-vu about the thing, which is now larger, and more evolved in its electronic chaos.

Chase tries different methods this time, yet still the timer counts down to zero, and we see a more bigger, more cosmic look at the disintegration of the universeAs

As Chase is "reincarnated" repeatedly, each time, his memories of other time-lines where he tried to disarm the "bomb" become more solid, a girl named Faith, an alien in human form sent to help him understand the bomb, and an interdimensional parasite known as the Metaphage, who thrive on on the very law of entropy that the bomb uses to destroy us, will invade the planet, spreading rapidly through multitudes of human bodies in which they can only survive for a short period of time To hunt down Chase, Devon and Faith.

Every time they encounter the device it's a bigger, more advanced, and more bizzare. As it grows it causes a phenomenon called graviton psychosis, anyone near the bomb exhibits disturbing suicidal and homicidal behavior, and ironically enough the psychosis is linked to cannabinoid receptors, Chase and Devon are only able to interact with the device unaffected because the THC is acting as an antidote.

but It's temporary. graviton psychosis gets worse every time, the Metaphage come at him faster every time. If he doesn't figure this bomb out soon, he never will.


A bomb desposal expert must face the wrath of otherworldly beings whilst finding a way to diffuse their Doomday devise.
A very original concept played out in a kind of Groundhog Day, Edge of Tomorrow-esque story format. And it worked enough to hook a reader. But after a while, it did seem like the concept took on a very complex form, especially after p30 which is where the story kind of lost its novelty. Because that was the point where I realised Chase was passive as a character and that he was to be pulled through the narrative by all the other characters in the...
1 year ago | read more...

A pothead EOD hotshot comes into contact with a cosmic bomb that destroys realities.
This was a decent sci-fi/horror-esque script. Movies like “The Mist” and “The Thing” came to mind with a touch of “Speed” (bomb demolition) as I read through this. High concepts and cosmic threats on par with Lovecraftian horror are difficult to show on the screen. With the right industrial special effects team and director, I can see this can be a feature film. The challenge is to make sure it does not get a B level movie unless you foresee it b...
1 year ago | read more...

A bomb disposal agent must defuse a mysterious device, or every living being will lose the capacity for free will.
First of all, I apologize for the length of this review. I found this tough, as there are many things to love, and yet a number of significant flaws, in this story.

Some aspects are highly original and there are moments that are simply inspired. There are a lot of cinematic and visual moments and some solidly novel sci-fi fare. It is obvious that extensive research went into several innovative concepts. However, there are some plausibility iss...

Moving Day
feature
By Denzel Robertson
In an alternate reality a young couple's weekend stay at a small town hotel reveals bigger secrets that the town has been hiding.

A Fracture in Nature
feature
By David Serra
A young man and his friends try to survive the carnage strange creatures, regenerated by an alien experiment, bring to a small town.