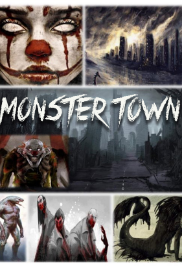 Sheriff Jack Warren and his deputies fight to maintain control in Monster Town – a city inhabited by the monsters from our worst nightmares!

In the pilot episode we meet Sheriff Jack Warren and his deputies — Chase (clown), and Franco (serpent man) —as they prepare to kill Jack so he can travel back to earth where he will inhabit a coma patient’s body. He must do this to assist Father Peter McMahon in the capture and transfer of a poltergeist.

Once on earth, Jack meets the Harris Family (Mr. Harris, Sandy & Joshua) who need his help after being terrorized by a shadow creature. Jack cleverly kicks Poltergeist butt, and sends the creature back to Monster Town where his deputies are waiting.

We then return to M-Town where a young clown girl’s body is discovered in an alley near the vampire district. Clearly the work of Vampires, the mystery becomes who killed her, and why.

We meet the shot caller for the Vampires — Vincent LeDans — along with several of his henchmen. We are also introduced to the shot caller for the Clowns — Bolo — whose daughter was the girl found dead. Jack and his deputies need answers quickly before war breaks out between the Clowns and the Vampires. We are also introduced to the Gargoyle’s leader — Nine — who speaks mostly in riddles.

As the investigation concludes, with the clowns and the vampires on the brink of war, we learn that even in a place as dark and horrifying as monster town . . . There is still hope. We also learn that Sheriff Jack Warren has a very dark secret that continually haunts him.

Set on an island surrounded by darkness. This is the place where the monsters live after they've been captured on earth and brought here by Sheriff Jack Warren and his deputies. The monsters have their own districts, and each district has its own shot-caller, all of them dead set on doing what's best for their own people.

The town is comprised of Vampires (the Blood Bank), Clowns (the Carnival), Paranormal Entities & Poltergeists (the Haunt), Giant Insects (the Hive), Creepy Children (the Corn Fields), Serpents (the Garden), Zombies & Ghouls (Half-life), Wolves (Dogtown), Gargoyles (the High-rise) and the small community of humans that find themselves in Monster Town.

The island is surrounded by black water, that not even the monsters go near for fear of being taken by the Mermaids — clawed creatures in the water that kill everything the beach offers them.

Rapture of Elle Divine - Reboot E1
television
By Reid Barwick
Elle Divine walks from the midst of the Blue Ridge during a pandemic. She desires Elle Divine to fix things gone wrong over starting with two female disciples

Small Time Villains
television
By Michael Harris
A trio of small time crooks are accidentally endowed with an impractical set of superhuman abilities and get in way over their heads when they decide to join a criminal organization.