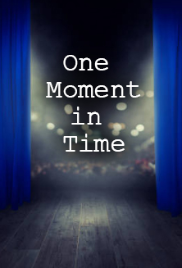 One Moment in Time

When his life spirals out of control, a motivational speaker is forced to analyze his past, his morals, and his priorities in order to reinvent himself.

William Shears is a self-indulgent motivational speaker, or “performance expert” as he calls it, whose life is spiraling into a state of disaster. His marriage to his pregnant wife is failing, he has little if any relationship with his 10 year old daughter, and the new infomercial he just launched for his business appears to be a massive failure. Additionally, he and wife fear their daughter Celia is on the spectrum as she is failing miserably in school.

William and his wife Vivian attend marriage counseling where Liz, the therapist, probes William about several things, including his ability to identify with his feelings. He insists that he is in fact an expressive person, and his wife reveals an oddity in that when they attend theater William tends to burst into tears, but only during the curtain call.

Celia lobbies her parents to audition for the town musical, a prestigious annual show. She auditions and lands a good role, but with one important stipulation. Due to her age, a parent must also participate in the show with her. Therefore, Vivian volunteers to do it.

William comes home and finds Vivian lying in bed because the doctor orders her on bed rest. This means William must take Vivian’s place in the musical, which he absolutely dreads.

During the first rehearsal, the cast holds a bonding session in which they each share their favorite life memory. Unable to think of anything positive in his life, William passes and does not participate.

This causes William to question the joys of his own life, and flashes back on his immigrant father’s tough life working as a chef at a restaurant.

After a massive argument with Vivian about Celia’s condition, William learns his father has died. He flies to Orlando to help with funeral arrangements. He is reunited with his mother. The only date that works for the funeral home isn’t until the following Tuesday, which means he must stay with his mother for the week. During this time a number of small incidents force him to analyze his past, his morals, and his priorities.

William commemorates his father at the funeral by talking about how his father worked his entire life and questioning if he ever had any meaningful memories. As he is doing this he finds himself thinking often of his own life.

When he returns home from the funeral, his demeanor changes and he is much more endearing to those around him. He becomes a better father, friend, mentor, and husband. Everything seems to be improving.

But when Celia accidentally tells William that Vivian was never ordered to be on bed rest, William flips out. Vivian said she lied to test William, and he passed! She shows him Celia’s test scores; she’s improved significantly, and it’s thanks to him. The family unit shares a cathartic, loving moment.

William has one last emotional session with Liz. Before opening night, William thanks the actors.

Vivian watches William, Celia, and the other actors perform the show as William remembers his father receiving praise from the restaurant’s members. The two bow at the same time, and William finally receives the unforgettable moment that he’s always wanted.


A motivational speaker looks back at his past and tries to get his life together.
The concept of this film was great. It drew me in and interested me. While the idea wouldn't seem original at first, once you read it you realize how different it is and how great it is. The first 10 pages really draw me in because it shows me what normal life is like for the characters while still introducing some of the major problems in the story. I think the scenes were written well. They were a good length and didn't seem to drag on. The cha...
1 week ago | read more...

By Jeff Jarnagin
When a journalist matches wits with a murderer, her world unravels in ways she never expected.

By Brandon Hanson
James a high school student with severe psychosis, is thrown into a world of chaos seeming to lack order; he must look in inward to find inner peace.